The Association was formed as a social club of former students of the University with the objective of promoting the interests of the University and its students. It is committed to providing assistance to meritorious students of limited means and at times it has done so from its Duty Fund. It also intended to set up a centre for students’ activities and programs but could not do much in the absence of a regular office or premises of its own. Old students’ home is still an unfulfilled target. In 1965 the Association was hopeful of receiving a piece of land from the University to build an alumni centre. In 1998 Prime Minister Sheikh Hasina announced the allocation of a plot of land from the old Railway area to the association but bureaucratic procedures have blocked the process of such a transfer till now. At one time there were several branches of the Association in other towns and cities but there are none at the moment.

Under the dynamic leadership of the Executive Committee of DUAA (2004-2013) led by its president Syed Manzur Elahi and Secretary General Raquibuddin Ahmed since 2004 DUAA came to flashlight through arranging its own office complex in the ground floor of “Nabab Nawab Ali Chowdhury Senate Bhavan” of Dhaka University as the construction was completed in 2007 by its own fund. This has been styled as the “Alumni Floor” with 16,000 sft space that includes office rooms, meeting and conference rooms, lobby, library, cyber cafe in a computer lab, coffee house, gym and a big modern prayer hall, all covered by AC. Alumni Floor has become a get-together centre for the alumni with necessary amenities. With about 10,000 life members DUAA Executive Committee (2013-2016), led by Raquibuddin Ahmed and Dewan Rashidul Hasan as President and Secretary General respectively is now committed and actively working towards the development of our alma mater – the University of Dhaka, popularly known as the “Oxford of the East” and welfare of its students of present, past and future. To mention only one of about a dozen projects, DUAA offers about 400 scholarships every year through collecting donations and arranging a number of Trust Funds to each year of each department and Institute of Dhaka University. 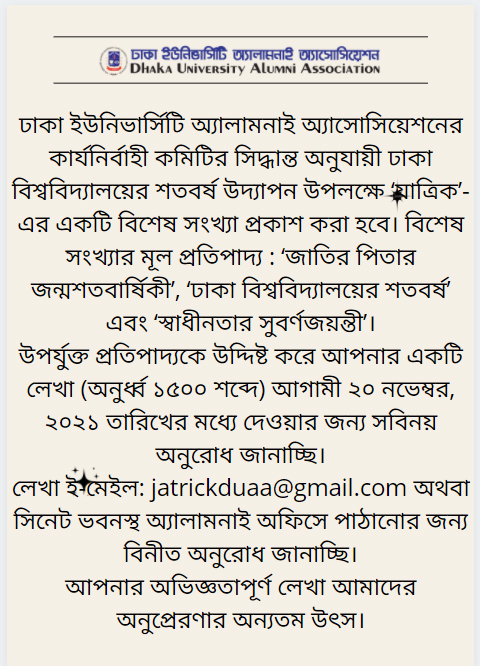